UPDATE (10/05/16, 7:31pm): John L. Little, the assistant curator & research team leader at Seattle’s Museum of Flight, confirmed with us in an email Oct. 5 that “injecting vegetable oil into an airplane’s hot exhaust flow is done all the time at air shows.” White smoke is produced by many types of vegetable oil, but primarily Canopus oil. An agricultural airplane could easily do this, “but doing so to compensate for an inoperative radio is definitely not a standard procedure in aviation.”

UPDATE (10/01/16, 2:30pm): South Seattle Emerald was informed by one of our freelance photographers that Long Range Acoustic Devices — used to create high-pitched noise for crowd control — were used by law enforcement on the protectors as they prayed by the pipeline.

Thursday afternoon, the South Seattle Emerald received a call from Jennifer Fuentes – one of the protectors who traveled from Seattle to North Dakota to stand against the North Dakota Access Pipeline.

Fuentes said protectors were leaving a site by the pipeline after having gathered for prayer when 21 of them were encircled and arrested. Fuentes, who participated in the NoDAPL march in Seattle, was not arrested. But South Seattle resident Bob Barnes was.

Barnes said he had just gotten out of North Dakota’s Morton County Jail after having been arrested and held for approximately 24 hours.

According to Barnes, after a peaceful prayer next to the pipeline construction site, protectors began leaving the site in vehicles and on horses. Barnes said there were more than 100 people when the latter half of the group was cut off by law enforcement and Barnes was pulled out of his vehicle.

“It was pretty outrageous…people got out of their vehicles and went over to the pipeline and prayed,” Barnes said. “That was the most radical thing that happened.”

See video of the encounter and arrests here and here.

Barnes told the Emerald that a woman’s phone was confiscated during the arrest because she was filming police.  When her phone was returned, the video was allegedly erased.

“The only one I know is that one person — a female — was walking on the access pipeline’s private property and going livestream,” Keller verified. “And because she was on private property, one of the officers approached her… I’m sure they took the cell phone, but I don’t know that they deleted it…but if it’s live, then the video’s there.”

He said the department is still going through reports.

However, when Keller said “we were watching the live stream and saw that she was walking on private property” it prompted questions about police surveillance and monitoring of social media posts including the use of a stingray.

Keller verified that the department was using a stingray – an armored cellular tracking device (often a vehicle) that acts as a cellphone tower to get locations and identifying information of people in an area –  and that they use intelligence and investigations to monitor the protectors.

“It might look menacing,” he explained, “but it’s for the safety of the officers as well.”

Barnes said when protectors were surrounded by police, his first thought was surprise, which was immediately followed by a feeling of naivety and then helplessness. “They’d pinched us,” Barnes said. “And there was no getting out. A couple people tried to run and they were tackled and thrown to the ground, guns put in their faces.”

Live tweets from Unicorn Riot’s account show that police did indeed show up in full gear. 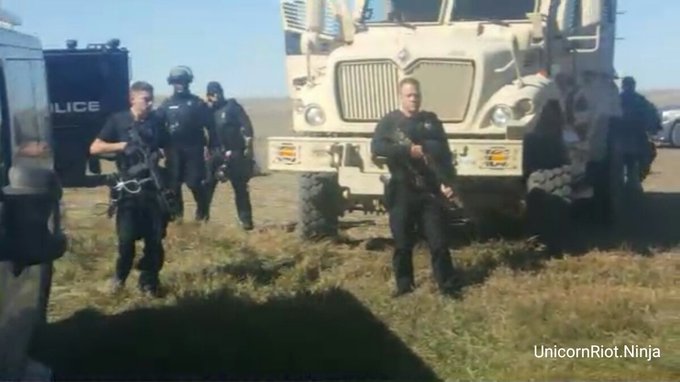 Barnes also recalled that there were multiple agencies present when he and others were arrested. Morton County Sheriff’s Department spokesperson Keller verified this but explained that, because Morton County is so small and the department itself not very large, they have to call in officers from other agencies on account of the “2,000 to 3,000 camps and protesters.”

Keller called this report a “rumor” and said the plane wasn’t related to law enforcement but, rather, to a local farm.

“Around here, we’re an agricultural community,” he began, noting that nearby farmers hire aerial applicators to spray for weeds. Two pilots had been spraying Wednesday and one of them came up over the hill where the protestors were. According to Keller, the pilot wasn’t spraying pesticide but vegetable oil which creates smoke when mixed with the plane’s hot exhaust and is standard protocol so these low-flying aircraft can be seen.

“It creates more of a signature for other aircraft to see where you are,” Keller said, adding that the plane “was about a mile or three-quarters of a mile out from the protestors.”

While Barnes said being in jail is never fun, he contended that he and others weren’t treated poorly during their time with the Morton County Jail. “I will say we were treated pretty reasonably once we got to the jail,” he said.

“Of the 21, probably a third of us were Caucasian [including Barnes himself] and the rest were Native from all over… they were treating us all pretty civilly. They seemed like they were going out of their way to be polite which was interesting because it’s not always like that.”

Barnes said this instance didn’t involve any dogs, but said there were armored personnel carriers, and some sort of tank.

“I think it was an attempt to intimidate people,” he said. “I think it’s going to backfire because it’s just going to strengthen the resolve.”

All those arrested received charges of criminal trespassing; some were charged with resisting arrest and a few others had warrants from other states, according to Keller.