Skip to content
In the wake of a white supremacist rally in Charlottesville, Virginia Saturday, protesters gathered at Denny Park and marched to Westlake in Downtown Seattle yesterday to confront a right wing group called Patriot Prayer. On their way, however, protesters encountered human barricades of police, canisters of pepper spray, and flashbangs.

Patriot Prayer is a self-proclaimed love and prayer group created by Portland, Oregon’s right wing rallier Joey Gibson. His Facebook event for the rally states “It is a belief that the individual is weak and that we are all victims … These liberal strongholds run off of hatred and negativity.”

The event, though scheduled before recent tragedies, took place the day after white supremacists and Nazis gathered en masse in Charlottesville, Virginia and killed one counter-protester, Heather Heyer, while injuring others.

Meanwhile, the counter-event, spearheaded by the Greater Seattle Industrial Workers of the World General Defense Committee Local 24, was full of protesters. That Facebook event read “The bigotry, racism and violence that far-right organizers are bringing to Seattle on August 13th cannot be allowed to go unanswered. Regardless of our diverse political affiliations and views, we understand that solidarity and unity in action is our strongest weapon.”

Gibson himself denounces claims to white supremacy but espoused backhanded racist rhetoric during the event. At one point, a young Indigenous person took the stage saying, “Everything you have is stolen from us. This is our country, too. It was ours first and is ours forever.” To this, Gibson responded, “Let me ask you a question: Did Native Americans not attack each other over land before?”

Protesters initially gathered in Denny Park and, once they reached a good 1,500 or so, headed toward the Patriot Prayer rally. The protesters were blocked at 2nd Avenue and Pine Street, however, by police. The Seattle Police Department decided their tactics for that evening were to prevent protesters from reaching Patriot Prayer supporters.

An unidentified protestor, who was also at Standing Rock, is treated for pepper spray. He noted the pepper spray made no difference in him reaching his location. [photo Alex Garland]

The day prior, South Seattle Emerald spoke with SPD communications officer Patrick Michaud who said “I don’t think we typically let [clashes] just happen, and we’ve got a few recent examples of us doing that, and I think that’d be a good way to look at that … I would be surprised if it didn’t [utilize the tactic of a bicycle blockade].”

It is true that SPD has recently been changing tactics with potentially clashing groups since the Milo Yiannopoulos event and protest at the University of Washington on Jan. 20 that left many wounded from brawls and left Joshua Dukes shot. At that event, police held the line around the perimeter of the crowd, letting brawls clash below and pepper spray exchange between supporters and protesters. Since then, and after much scrutiny, SPD has decided to take the tactic of bicycle barricades often between opposing parties.

This time, however, it was taken a step further by preventing one group from advancing to their free speech destination altogether for quite some time. In addition, Gibson explained in a live video posted to Facebook late Sunday night that SPD set up the metal fence barricades around the Westlake stage before Patriot Prayer arrived.

Protesters did eventually reach Westlake Park. Upon arrival, much of the time was spent yelling boos and flipping the bird.

“They just overpowered anything and everything that we had to say,” Gibson explained in his live post. “I could not hear anything … it was weird. I’ve never had such a tough crowd.”

Gibson didn’t understand why the crowd booed a woman who got on stage selectively reading Martin Luther King Jr quotes that appeared to condemn protests. Gibson thought she was receiving boos simply because she was white and reading the quotes.

At one point, two men took the stage behind Gibson. One shouted Black Lives Matter into the side of a mic-holder’s face and then turned to urge the crowd’s chant. He was successful, and visibly strained. The two men then raised clenched fists. Their names: Arthur Ford, aged 23, and Mario Cater. Gibson then expressed they could talk and later asked others if they wanted to come up and speak as well.

“It’s social inequality everywhere we go,” Ford said. “I’m talking about everything … I’m not born into the stuff that you were born into, I’m not privileged like you!”

Ford was answering a Patriot Prayer crowd member. He then explained it has to do with government labeling people. He explained society acts like one Black person’s actions define every Black person.

“People aren’t looking at you and saying, ‘oh you killed a man? He did it too,’” Ford told Gibson. “That’s what we live off of.”

The moment was captured on video. All Gibson recalled from this moment, however, was that Ford and Cater “said eff this, eff that, and Black Lives Matter.”

Later, a Patriot Prayer crowd member turned to Walter Olebar, who stood behind the metal fence wearing all red clothing, and called him a gang member. Ford and Cater, having descended from the stage at this point, stood next to Olebar and challenged the Patriot Prayer supporter directly.

“Just because you met one idiot doesn’t mean he’s an idiot,” Ford replied. Both Ford and Cater were getting pretty upset at this point, and began leaning in and gesturing with their hands as they talked. The accuser then bellowed, “Hey! If either of you put your hands in my face I will fight you!” There is however some discrepancy whether he said “bite” or “fight.” A woman standing aside then began putting up her hair into a ponytail and stepped in between the parties, telling the accuser he needed to leave.

Tracy Molina laughs as she intervenes but continues listening to a Patriot Prayer member. [photo by Kelsey Hamlin]

This was Tracy Molina. Initially she wasn’t going to attend the protest because she has attended many and feels they’re all the same. However, after the events in Charlottesville, Virginia, she changed her mind.

“I jump in the middle to stop fights, I don’t know why,” Molina said. “I went to one of these in Portland and you could hear a kid’s bones breaking in his face. Someone has to step in.”

She expressed that those present for the Patriot Prayer rally didn’t understand hate groups intertwine for these events. Molina mentioned specifically Proud Boys and Evropa.

“I’m on the fence of the counter protest: Is it helping their side; is it helping them recruit?” Molina asked. “I’m Native American, Mexican and White. And so when I have them come up to me and ask where I’m born, I know what they’re saying.”

She mentioned that these types of groups disrespect those who fought in WWII. Every generation in her family served in the military, including herself.

Charlie Wilson, an iron worker, held the same sentiments. Although clad in suspenders and American flag colors, he carried a sign saying “F— off Nazi scum.” When he’s not working, he tends to engage in political activism. A Sen. Bernie Sanders voter, Wilson expressed that he’s lost respect for Democrats.

“I just want equality for all. I don’t put up with this fuckin’ shit,” he said. “I want [white supremacists] to know it’s not tolerated and they should know there’s more of us. They can mask it about immigration and gun laws all they want.”

Wilson expressed that he had to fight to keep his sign. He wasn’t the only one. Jacob Hays walked down the sidewalk carrying a “buds not bombs” sign, but was quickly swarmed by three SPD officers in riot gear. They questioned him and said his sign was a weapon and he’d have to leave it behind.

Police confront Jacob Hays about his sign, calling it a weapon. [photo by Kelsey Hamlin]

The sign, however, has been around for quite some time and wasn’t an issue at other protests. Hays is the very person, with the same sign, captured in a Seattle-famous photo sharing weed with young, bald, neo-Nazi Kyle Broussard at a pro/anti-Trump rally. The sign, Hays said, is one he’s had since 2014 and is made from a broken piece of his backyard fence. To get past the officers, he threw it in the trash. Other “weapons” SPD confiscated included a sign with plastic PVC pipe as handles, a 2×4 piece of wood with screws in it that held together a replica sign but was broken, and a funny-shaped stick.

SPD officer T. Duennes, one of the three who said Hays’ sign wasn’t allowed, could only explain that officers were vaguely instructed to confiscate anything that could be a weapon, and it was essentially up to each officer’s discretion what that entailed. Duennes couldn’t quite articulate why that sign was more dangerous than the thousands of other signs already present.

Someone else had more of a tussle with police. Nicole Calvin said she was walking to Westlake Park when she was pushed to the ground by a female police officer with a bike. The officer then reportedly held Calvin down but was pulled off by a Sergeant who rushed over. Calvin had fresh scrapes on the tops of her feet that were bleeding and her wrist was swollen.

Spring Pinkney simply came out to see the event, went back home to tell everyone, and then ran into the opposing rally. Her daughter joined the latter, and Pinkney was scared for her so she came back.

“When the cops came out with those long sticks and everything, I got scared,” she said. Pinkney also expressed the moment SPD threw flashbangs and pepper sprayed protesters at 2nd Avenue and Pine Street. 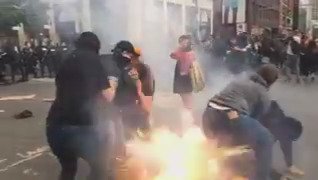 “It’s scary right now all over America. I think it’s all because of Trump and his rhetoric. Trump must go,’ Pinkney said. “It’s not surprising. I’m from the South, I’ve seen hatred, I’ve seen racism … But I’d rather know than have someone smiling to your face like here.”

One of Gibson’s followers reported that their tires were slashed by the end of Sunday’s events. SPD announced three people were arrested and there were no injuries.

“To the white supremacists and fascists who gathered today at Westlake Center under the false pretense of patriotism the day after the violence that a similar group sparked in Charlottesville, I have a message to share on behalf of the people of King County: ‘We fought a Civil War against slavery, and you lost. We fought a World War against fascism, and you lost. Today, we stand united against the hateful rhetoric you have brought to our community. And you will lose again.’”

Gibson’s next event for Patriot Prayer will be in San Francisco.