UW College Republicans use fake domain to reroute to their website 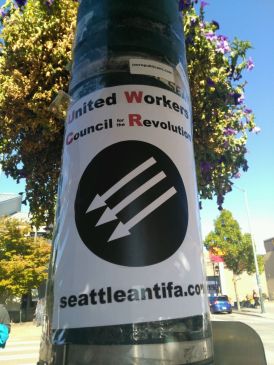 After a slew of posters were put up  by the likes of neo-nazi groups like Evropa and Atomwaffen Division last year, the UW College Republicans (UWCR) are now plastering the Ave and the UW campus with their own posters for recruitment using a seattleantifa.com URL that misidentifies who they are.

Many view this decision as problematic because, thought would follow, using the antifa URL means the website would align with antifascist ideology when it instead reroutes to something quite the opposite (the UWCR website). Some go so far as to call this internet fraud.

UWCR president Chevy Swanson said none of last year’s posters are associated with the UWCR or its members.

“As far as we can tell, they are a group of incredibly racist people who meet on their respective message boards and occasionally put posters around to generate controversy,” he said.

He did verify Monday afternoon, however, that UWCR are using the seattleantifa.com URL to reroute to their own website. The website’s reroute began as Swanson’s own year-long, $12 purchase to reroute the domain to a Milo Yiannopoulos page.

“We didn’t buy it as a club, I bought it as a joke earlier,” Swanson said.

The decision to switch from rerouting to Yiannopolous over to UWCR’s own website, however, was a united conclusion for UWCR’s officers.

Yiannopoulos is a controversial public speaker and Republican notorious for targeting transgender individuals, making racist remarks, and previously editing for Breitbart News. UWCR’s invitation for him to speak at an event on campus last year caused controversy that resulted in an antifascist, or antifa, member and protester getting shot.

Swanson said UWCR’s plans this year are to simply be bigger. He cited an event they’re hoping for, planning it to be “bigger than Milo Yiannopoulos.” That was all the detail he would disclose at this time.

The posters, however, are a matter of contention. They’ve been circulating around social media and group chats as early as last week. Swanson estimated the posters have been up for two weeks.

An antifa UW student who only wished to be identified as RR saw more than 50 posters on their way to campus one morning. There were several types accompanied by small, tab-like stickers. Some had the original UWCR website on them and others had the deceitful Seattle antifa URL.

“But it was so obvious they had been printed in the same print job and a lot of the time, they were like three inches apart,” RR said. “I thought it was kind of stupid because I can’t imagine that they’re going to grow their membership by linking people who consider themselves aligned with antifacism to their page.”

However, this is precisely what UWCR hopes for. Swanson said the reasoning was both to be taken as a joke and to recruit more people.

“I don’t think we’re misbranding because people realize pretty quickly it’s at worst a joke that’s maybe only funny if it’s your type of humor,” Swanson said of the deceitful URL. “Any time we put up posters for our regular club, they get torn down before the night’s over. So we do a mix of regular posters and stickers that are a little less identifiable to us.”

The posters were taken down quickly. RR cited tearing them down and in addition knowing several others who did the same. They don’t notify the UW Police Department because they don’t trust UWPD.

“Because why give UWCR and their ilk a platform to spread their message and promote their brand?” RR asked rhetorically. “Why give them the satisfaction of seeing their posters up? I hope that by taking them down, we can begin the process of discouraging them and making them feel unwelcome on campus because they are.”

RR felt UWCR’s presence and their vocality make people unsafe and uncomfortable. In particular, they said the racist, homophobic, and antisemitic rhetoric is where the issue lies.

“If people in their classes don’t appreciate that behavior and call them out for it, I don’t feel at all sorry for them,” they said. “I hope their platform shrinks and that they are forced to reckon with the consequences of their actions. I hope they find some accountability there. But in the meantime, let’s all take down their posters.”

Swanson said antifa and UWCR are at odds.

“We’re frequently targeted online and have been in the past in person by [antifa],” he said. “For things that aren’t really about them, like the Milo event, it can’t really be considered a direct attack on them.”

But it’s not only the UWCR who get singled out. Students on both sides of the political spectrum, like UWCR’s Jessie Gamble and activist student Alan-Michael Weatherford, received harassment.

Swanson expressed that UWCR hopes to catch a new batch of people who are unfamiliar with Seattle’s political dialogue by using the antifa URL. In addition, he cited a poster that “was a joke” where it said “join the UWCR” and had a “fake definition” of what it stood for. The posters, he said, are up in a few buildings around the Quad and on poles along the Ave and Greek row.

RR and other Seattle antifa were suspicious that the fake domain was used to track IP addresses and phish.

“That made me feel sympathetic toward people who are interested in getting involved in local activism,” RR said, “who might not know the history with UWCR, might not recognize that acronym, or might not have that cyber security experience.”

But Swanson assured no such thing is happening. He said UWCR only gets baseline analytics. This includes what time people visited, what pages people are coming from (if it’s just vaguely Twitter, Facebook or elsewhere or if it was typed in), and IP addresses. The IP addresses, however, are minimal. They aren’t organized in a searchable way and most will simply trace back to UW’s own servers due to the wifi and security.

Swanson noted the UWCR subsequently get a lot of traffic off of social media. He said they’ve only received Facebook complaints and “a couple of weird threats from people in Kirkland,” Washington, who he thinks didn’t realize it was Seattle-based.

“I think we’ll keep the domain going to our site for that long unless we find a better use, but I doubt we will,” Swanson said. He then shrugged and smirked, “If there’s anyone, like antifa, who wants to buy it from us, they can contact us.”