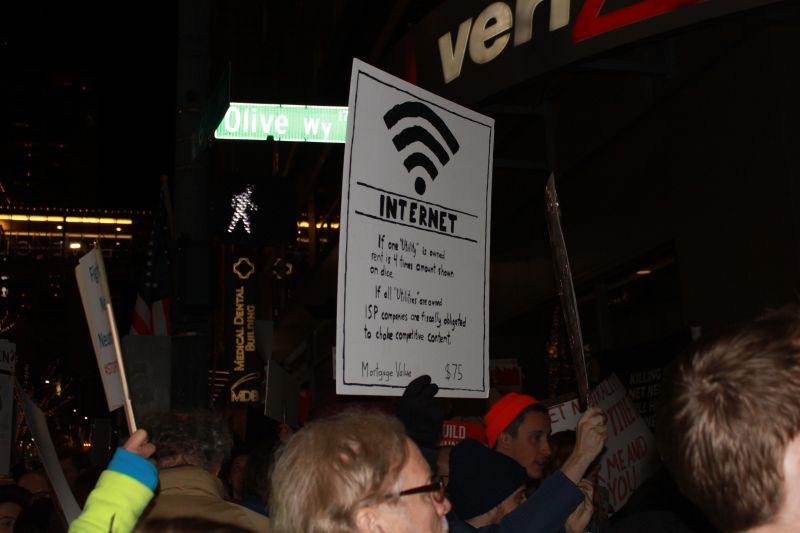 Shivering in the cold as the sun set, breath visible as bright cameras flashed, a crowd of approximately 20 people gained momentum as they grew to about 70 in front of Seattle’s downtown Verizon store Thursday night.

The gathering was to protest the latest attempt to end net neutrality (the principle that Internet Service Providers (ISPs) should give consumers access to all legal content, websites, and applications on an equal basis, without favoring some sources or blocking others).

A proponent of ending net-neutrality, newly-appointed FCC Chairman, Ajit Pai, backed his promises to do so by introducing a new proposal that he says would stop the government from “micromanaging the internet.”

He feels the regulation stifles innovation and is an example of government overreach. The legislation from 2015 Pai wants to rescind, however, makes it illegal for ISPs to block or slow down websites for consumers.

“We should not just accept net neutrality will be repealed,” organizer Freeman Ryan said. “We have the power, therefore, organize. Without the protection of net neutrality, Verizon could, for example, strike a deal with Amazon and bring faster internet to their website only. It’s really a handout to the rich like the tax bill. They only know one thing, the pursuit of greater profits at our expense.”

Protesters felt net neutrality equates to free speech. “It sets the stage for the outright censorship of speech,” Ryan said. Because the internet is a basis for communication, if certain platforms are prioritized over others, certain forms of communication will be prioritized over others. This is especially problematic when certain spaces online are better suited for specific  conversations and groups.

One protester was a living example of this. “I am a trans woman and I have been for four years,” they said. “Before I knew what mattered to me, I found it on the internet.”

Throughout the night, a band called Rise Up! Action energized protesters with their assembly of drummers, saxophone players, trombonists, and trumpets. They were the same group present at the last Stop the Sweeps! sleep-in at City Hall. Often, during chants, they would pipe in to respond as if the instruments themselves were voices. This same tactic is seen at antifa marches, except typically with only drummers.

“Net neutrality is the biggest fight of our generation,” said Kyle Davis, an early participant in the protest. “Every protest going on requires the internet.”

Davis and others discussed the internet as a baseline of communication at the core of most modern movements today. In fact, we are so adapted to the internet that most movements, even if small, have their own hashtags. In part, movement labels and brands aren’t new because effective organizers know their title needs to be easy, memorable and catchy, the core of most hashtags. But to get national attention and compile an aggregate of data across a nation and across the globe, hashtags are particularly useful. They also gauge public interest.

There’s more to the internet, though, than it simply being a tool to track volume and compile a timeline of data and incidents. “It lets us communicate on divisive issues,” Davis said. “And we get to learn about anything that goes against the established order.”

Sure, while algorithms on Facebook and companies like Sinclair Broadcast Group puts people into opinionated and informational silos, there are still platforms that don’t. And the internet is still freely searchable in an endless sea of ways. Yes, Google tracks who you are and what you like and brings up your searches accordingly, but there are ways to deactivate this feature and alternative search engines available.

While it can be argued that large, powerful companies more or less control nearly every monetizable facet of life. So, too, do they hold sway over the internet. Alex Hays, another protester, explained that specific companies compete only among ISPs to monopolize.

“They aren’t really in competition, they work together to have monopolies,” he said. “Too many of us, we don’t have a choice to use [the internet]. We need it to just function in our society.”

Another protester pointed out how ISPs opted to keep landlines and wavelengths out of America’s rural areas because they felt it unprofitable. The same companies ruling the internet were only forced to bring landlines to small towns by the government in 1934 with the creation of the FCC for the sake of equal access.

Currently, most rural areas in Washington often can only choose between one or two service providers. How much it will cost them to have access to the internet or what type of service they desire is left to ISPs.

Mark Hill traveled from Tacoma to protest for net neutrality. “I’m here as a concerned citizen,” he said. “This infringes on the rights of people, the right to be informed as a citizen in America. For me, it’s showing I stand for something that’s not just for me but bigger, affecting everyone.”

Another protester, Elizabeth Jabaay, expressed how the internet provided a safe haven in a rural town. “As a  gay woman who spent most of her adolescence in Tennessee, let me tell you, the internet is sometimes the only safe place to be,” she said. Jabaay further explained she uses the internet her homework at the University of Washington, for contacting professors, finding protests, talking to family, reading, writing, and following artists. “Don’t tell me this is a luxury we can do without.”

Should net neutrality be repealed, her access to these types of items (some required for even attending school) could be slower, intermittent or non-existent. If colleges are forced to pick up the costs of giving their students access, tuition could also rise even higher.

One person who took the helm during an open-megaphone session to identify as an U.S. Marine. They explained the internet is vital, especially for those who are deployed because they use it to keep in touch with loved ones.

Others discussed the impact net neutrality has on small businesses. Comic creators and graphic designers often learn their craft online, publish their own work and make a profit out of online stores and publishing. Small businesses and startups use the internet to jump-start their operations.

“The internet is such an integral part of our society today,” Nick Tran, age 16, said. “This protects free and equal access to the internet. Almost every single business you see successful today will have a website.”

Tran’s friend Patrick Eaton, age 17, said a lot of people were simply posting on social media about how much the removal of net neutrality sucks, but he felt that wasn’t enough. “We’re making noise,” he said.

Davis explained the protest, while in front of the Verizon store, was in solidarity with the workers inside who will face the same ramifications as everyone else. Most view the internet as a utility because it’s used every day like electricity and water and sewage.

“It should be the same for everyone, like water,” protester Georgeann Brown said. “If I have to pay more for fast internet, then people with less resources will get stuck with slow internet and that will impact their lives. You can’t live without the internet anymore. I’m old, I don’t care [about using the internet]. But I really care about young people, and people with less resources, people that don’t have the benefits I have.”

Net neutrality, in this explanation, is an equality and equity issue. For those who cannot afford to attend college and gain access to classes that teach specific trades, many often opt to teach themselves over the internet. YouTube videos, tutorials, specific online programs, compilations of recommended readings and free online programs are only some examples of how essential unmitigated internet access is.

“We have a corporate President,” Brown said. “I think [corporations] have taken over. I’m sick over that, so we do have to fight back and I’m doing that.”