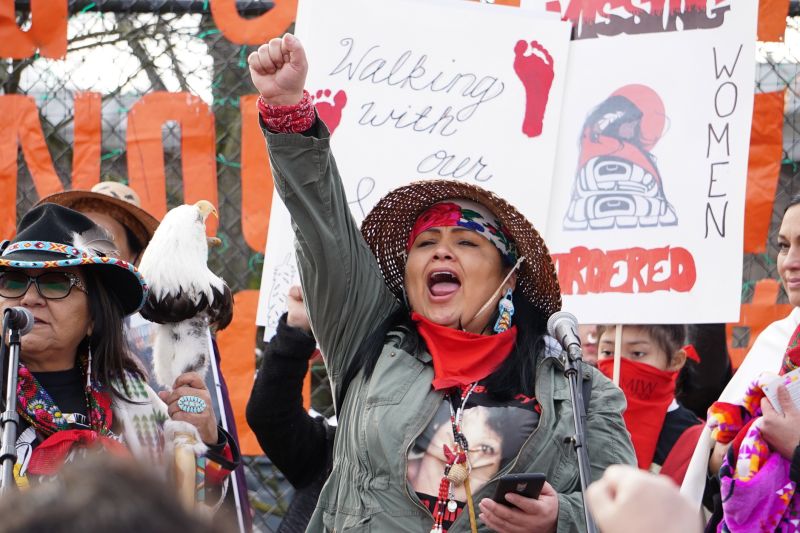 Saturday marked the one- year anniversary of Donald Trump’s presidency and welcomed the anticipated follow up to one of the largest demonstrations in the history of the United States.

Joining sister marches spanning cities across the country, Seattle’s Womxn’s March 2.0 served as a reminder that many of the thousands who poured into the streets last year to protest Trump’s inauguration have sustained their fight against patriarchy, misogyny, and violence against women they feel his presidency has emboldened.

Like last year, the 2018 iteration of the Womxn’s March began at Cal Anderson Park in Capitol Hill and ended at Seattle Center. But it struck a slightly different visual than its predecessor:

There were noticeably fewer people of color, but an early focus on the Indigenous and Two Spirit community.

This year, Indigenous and Two Spirit womxn opened the event with a ceremony recognizing the families of missing and murdered Indigenous womxn [MMIW].

The epidemic of violence facing the community is well documented, if not widely popularized. According to a 2005 national study authorized by congress, between 1979 and 1992 homicide was the third leading cause of death among Native women aged 15-34. There is no data on specifically nonbinary or trans Native womxn deaths.

While addressing the Committee on Indian Affairs on Violence Against Women in 2011 Associate Attorney General Thomas Perrelli stated that Native American women are murdered more than 10 times the national average.

Speaker Michelle Demmert, who is Tlingit from Alaska and is the newly appointed co-chair of the National Congress of Native Americans Violence Against Women Task Force, shared her own experiences:

“I am a mother, I am a sister, I am an aunt, I’m an attorney, I’m a judge, I’m a survivor from child sexual assault and I’m a recovering alcoholic,” said Demmert, “I’m here today to show that we have strength to build upon as Indigenous womxn and that we can grow from what’s happened to us. I’m a survivor as are many of you out there.”

Families of victims were then brought on stage and wrapped in blankets gifted by the community, also receiving a promise that their loved ones would receive justice and not be forgotten.

Attention then turned to the wider community.

Addressing the swelling crowd from the park’s stage, a Lakota “grandma” from the Pine Ridge reservation in South Dakota greeted marchers in her native language reminding them of the power found in togetherness.

“Today we are here to honor and seek justice on Turtle Island, all the way from Seattle to Standing Rock. We are one spirit, one prayer, one mind today. I want to thank each and every one of you for standing up with us today. Some of you came from far away. Thank you. We will remember, and we will not forget this day,” she said.

The request came after the ubiquitous knitted pink hats faced criticism for being exclusionary of womxn of color.

“But to me, seeing all those pink hats is very powerful,” Jeanne Acutanza said. “The argument against them feels somewhat overly sensitive. I’ve asked to be put in touch with the trans community. This hat shows women are not pieces to be grabbed. Pussies, pussy cats is a much more positive thing.”

Up until Saturday, Acutanza had been unaware that the creator of the pussy hats based their color on a woman’s femininity – a white woman’s anyway.

Not everyone’s vagina is pink, of course. And not every person who identifies as a woman or as nonbinary has one.

But after considering that argument, Acutanza came to agree with the criticism.

She also joined in the concern of many of her fellow marchers fearful of the country regressing to pre-civil rights days under a Trump presidency.

“There’s consequences that people just don’t even understand,” she said. “I think the vilification of immigrants, when this country was founded on the back of immigrants, this racism, is untenable. We’ve seen it before. To be silent is to be complicit. As a person of color coming from a family of immigrants, people who fought in wars, and seeing people trying to take that away: We’re better than that.”

Somewhat incredulously, given the origins for the Womxn’s marches held across the country, President Trump appeared to tweet out support for Saturday’s marches.

“Beautiful weather all over our great country, a perfect day for all Women to March,” Trump  tweeted on Saturday afternoon amidst negotiations with congressional leaders to reopen the government after it shutdown on Friday.

News of the tweet caused eye rolls by more than a few marchers.

Last year a major point of division was the lingering issue of white feminism and its history of overshadowing the experiences of womxn of color, particularly Black womxn.

Some womxn of color felt last year’s event wasn’t inclusive enough, and a few faced some notably crude comments while marching. Some who sat out this year’s march, say when they began yelling Black Lives Matter, the divergence between marchers supportive of the BLM movement and those opposed became clear. Some in the latter camp told those shouting BLM to shut up.

While this year’s crowd was littered with more signs promoting inclusivity than last year’s, it also appeared less racially diverse. A predicament not lost on some in attendance.

“It’s disheartening and sad to say, in Seattle I’m used to it,” said E. Bryant, tapping her drum as she stood on the periphery of the march after it left Cal Anderson.

However, as a Black woman, the march’s composition came as no surprise to her. “It’s a reminder that [inclusivity and diversity] are not in the areas they need to be. It’s a hard fix because they’re more subtle. Getting someone to understand your experience who wants to but also has white guilt going on: it’s such a road block.”

Instead, Bryant’s solution is for white Seattleites to show up in spaces supportive of communities of color particularly when they feel uncomfortable, unlike Saturday’s march.

Seattleites tend to believe they’re the champions of progressive values, and at times attend marches to be seen, rather than to be reflective of the larger issues facing the city’s marginalized, according to Bryant. This mindset, to her, widens the gap between inclusivity and action.

“As notably un-diverse as it is now, when people see me, they notice [my race] when they shouldn’t,” Bryant said. “It’s a red flag.”

Despite these harsh realities, Bryant remained optimistic. The Womxn’s March allows people to share the same love and the same hope. It’s a recharge, an energy booster she explains.

“We can do it together, and every individual’s contribution matters,” Bryant said.

However, not everyone felt a huge contrast in comparison to last year. Jamal Casimiro was one such person.

Casimiro, who is Dominican, attended Saturday’s march because he sees Black and nonblack Latina women as victims of hyper-sexualization in American society.

Rachel, who did not want their last name published, said they showed up for all womxn’s rights.

“I think everybody’s just kind of tired of what’s going on,” they said. “A lot of Americans were hoodwinked into believing racism is acceptable in this country. One of many things, not one specific thing, is going to change the world. This is a great show of solidarity.”

Standing in the crowd, Kathy Lewless, who also attended last year’s march, felt excited about the turn out.

“It shows the energy is still there around the Womxn’s March and womxn’s movements,” Lewless said.

Meanwhile, other activists of color felt inclined to either turn up elsewhere or sit out the march entirely.

And while Lewless understood the stances of those who didn’t attend, she said the decision to participate on Saturday ultimately boiled down to a personal one.

“It’s individually for me,” she said. “I didn’t feel it was exclusive. [The march] tried to help move the needle in our country. It started from people standing up so we have to continue if we want change.”

Lewless went on to explain that she marches for her daughters, who both stood beside her. It is imperative they understand from an early age that their voices matter.